Have you seen an ad for SurveyCompare? Wondering if it’s a legit site? In this review, we’ll look closely at one of the most advertised survey-offers on the internet to see if it’s safe and worthwhile signing up for.

SurveyCompare is a lead generation site run by UK-based company MVF (the official company registered is called MARKETING VF LTD). MVF is a marketing agency that generates new leads for clients in different business niches, such as panel providers.

“We offer either qualified leads or qualified clicks, delivered in real time directly to your sales funnel on a pay per opportunity basis.” MVF website

Working on behalf of market research providers such as Dynata, Ipsos, Toluna and Kantar, MVF gets paid on a CPA (cost per acquisition) or CPL (cost per lead) basis for each new respondent they help to recruit. Each person that signs up to SurveyCompare can sign up for several new survey sites, which means MVF can get paid several times for the same lead.

Key takeaway: SurveyCompare is not a real panel-site, but a lead generation site for 3rd party panels.

How realistic is their potential earning example?

SurveyCompare makes the following claim on the registration page: “You could earn up to £300/month.*”

In the footnote, they elaborate on the calculation:

“*The amount of money you can earn depends on how many companies you choose to sign up for and how long you want to spend completing surveys. For instance, the average survey pays £3; taking 5 surveys a day, 5 days a week gives £300/month”

How realistic is this?

It’s true that panels promoted on SurveyCompare such as OpinionOutpost, Toluna and LifePoints offer surveys worth between £0.50 and £3. Assuming that all surveys will be paid the top amount, £300 can be achievable within a month. However, the average survey reward per survey for these panels, in our experience, is around £0.75. Using an average of £0.75 per survey, you’ll need to take 400 surveys within a month to reach £300!

Key takeaway: Take the promised earnings with a pinch of salt.

What’s important to remember is that SurveyCompare is not a survey site but a platform where you can sign up for multiple 3rd party panels. So instead of signing up for Toluna, OpinionWorld and LifePoints separately, you can sign up for all three of them simultaneously by providing your registration details once. By accepting several offers, your details will automatically be parsed to 3rd party sites, which will ask you to confirm your registration.

What about my data? Are they safe with SurveyCompare?

SurveyCompare is run by a legitimate business following data privacy regulations such as GDPR and will not share your personal details without your consent. However, you need to be aware of the following: By clicking on the checkboxes (indicated in the picture below) for different survey offers, your contact details will be shared with multiple 3rd party companies. In digital marketing language, this is called “co-registration campaigns”. 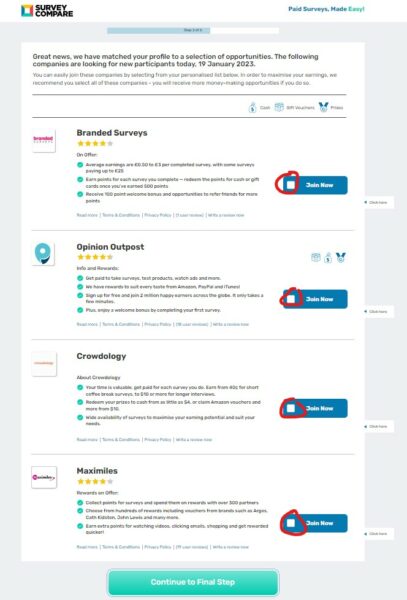 In the example attached, if you sign up for Branded Surveys, Opinion Outpost, Crowdology and Maximiles, you’re consenting to register with 4 separate survey websites. This means you’ll start to receive survey invitations from 4 survey sites, often with multiple survey invitations per day. Next to the checkboxes, you’ll find each site’s T&Cs and Privacy Policies, where you can read how your data will be used.

Key takeaway: Expect to be bombarded with survey invitations if signing up for SurveyCompare.

No, SurveyCompare is not a scam. They will only share your contact details with legitimate survey sites after you consent by selecting the checkboxes next to each offer. At the same time, users might be surprised when they suddenly start receiving survey invitations from multiple sites. It’s important to be realistic about what you’re actually signing up for.

What are the drawbacks of signing up for SurveyCompare?

We wouldn’t say that SurveyCompare is actively misleading users, but they could be clearer in terms of what service they actually offer. At first sight, you might think SurveyCompare.net is a survey comparison website from the site’s name, while in reality, it’s a lead generation landing page to recruit new respondents.

Here is a review of Maximiles we found on SurveyCompare: 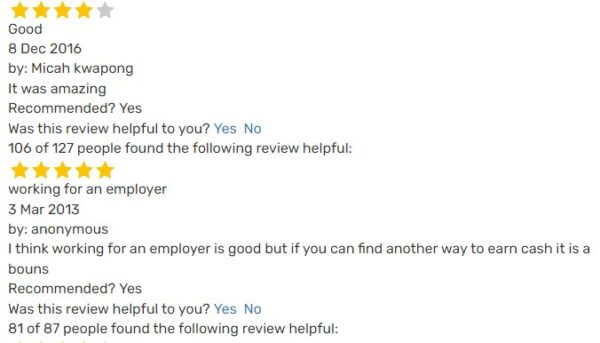 “I think working for an employer is good but if you can find another way to earn cash it is a bonus” – 81 people found the review helpful.

Most reviews are extremely positive, and some feedback, like the one above, does not make much sense to us. If SurveyCompare is supposed to be a real comparison website for surveys, we think they should make more efforts to inform their users objectively.

Key takeaway: SurveyCompare is not really a survey comparison site.

Encouraging fresh survey-takers to sign up for multiple survey sites simultaneously can overwhelm users with too many email invitations. This is not a great way to start a survey-taking career and could eventually discourage people from taking surveys altogether. And users who actually do end up taking hundreds of surveys per month are often ironically described as “professional survey takers” by market researchers scared of biased answers. Instead of blaming MVF for inventing an efficient method to recruit respondents, we’re more concerned about well-established market research organisations turning a blind eye to the consequences of recruiting respondents in this way.

1Expert Score
SurveyCompare Review Summary
SurveyCompare is a lead generation site operated by UK company MVF. MVF is specialized in helping market research providers such as Dynata and Toluna to recruit new members to their panels. SurveyCompare is a legit site, but keep in mind that your details will be shared with multiple sites at the same time (if you consent to it). Instead of signing up to survey sites through SurveyCompare, we recommend registering directly with each site after checking independent real reviews.
Incentive Level
1
PROS
CONS